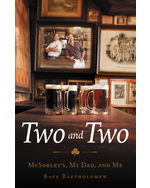 Two and Two: McSorley's, My Dad, and Me

Since it opened in 1854, McSorley's Old Ale House has been a New York institution. This is the landmark watering hole where Abraham Lincoln campaigned and Boss Tweed kicked back with the Tammany Hall machine. Where a pair of Houdini's handcuffs found their final resting place. And where soldiers left behind wishbones before departing for the First World War, never to return and collect them. Many of the bar's traditions remain intact, from the newspaper-covered walls to the plates of cheese and raw onions, the sawdust-strewn floors to the tall-tales told by its bartenders.

By turns touching, crude, and wildly funny, Rafe's story reveals universal truths about family, loss, and the bursting history of one of New York's most beloved institutions.

“McSorley's Old Ale House had been a Manhattan legend for more than 100 years when the author's father was hired on to work the taps. . . . The nostalgia-drenched memoir makes us want to revisit the joint.”

A “big-hearted memoir of a lifelong romance with New York City's oldest (continuously operating) saloon . . . a watering hole for artists, politicians, and oddballs, a storehouse of oral tradition passed through generations of staff . . . [Bartholomew's] portrayal of the rough humor and blue-collar warmth feels completely earned.”

“There is no bar in New York City perhaps even all of America with as much history as McSorley's Old Ale House. . . . but for former Grantland editor Bartholomew, McSorley's was just home. . . . The author expertly weaves together entertaining stories from his nights behind the bar . . . with more poignant moments between father and son. . . . Bartholomew does both his father and McSorley's proud with this touching, redolent memoir.”