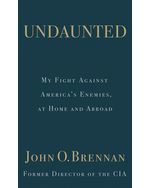 
Undaunted: My Fight Against America's Enemies, At Home and Abroad

A powerful and revelatory memoir from former CIA director John Brennan, spanning his more than 30 years in government. In this brutally honest memoir, Brennan describes the life that took him from being a young CIA recruit enamored with the mystique of spy work, to being the most powerful individual in American intelligence. Undaunted offers a rare look at the world of national security, the intelligence profession, and Washington’s chaotic political environment. More than that, it’s a portrait of a man striving for integrity; for himself, for the CIA, and for his country.