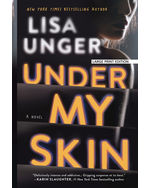 What if the nightmares are actually memories?
It’s been a year since Poppy’s husband, Jack, was brutally murdered during his morning run through Manhattan’s Riverside Park. In the immediate aftermath, Poppy spiraled into an oblivion of grief, disappearing for several days only to turn up ragged and confused wearing a tight red dress she didn’t recognize. What happened to Poppy during those lost days? And more importantly, what happened to Jack?

The case was never solved, and Poppy has finally begun to move on. But those lost days have never stopped haunting her. Poppy starts having nightmares and blackouts — there are periods of time she can’t remember, and she’s unable to tell the difference between what is real and what she’s imagining. When she begins to sense that someone is following her, Poppy is plunged into a game of cat and mouse, determined to unravel the mystery around her husband’s death. But can she handle the truth about what really happened?

“Unger brings the reader along as her narrator’s grip on reality is tested and keeps the twists coming in this standout thriller.”

“As Unger builds suspense, blurring the lines between dreams and reality, she considers how well one person can ever know another, as secrets abound. Another fine psychological thriller from a master of the genre.”

“Grief leads to self-destructive behavior in this searing psychological thriller from bestseller Unger.”