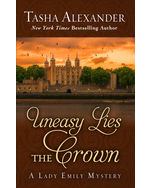 On her deathbed, Queen Victoria asks to speak with trusted agent of the Crown Colin Hargreaves, and slips him a letter with one last command: Une sanz pluis. Sapere aude. “One and no more. Dare to know.” The year is 1901 and the death of its longest-reigning monarch sends the entire British Empire into mourning. But for Lady Emily and her husband, Colin, grieving is cut short when a body is found in the Tower of London, posed to look like the murdered medieval king Henry VI. Then a second turns up in Berkeley Square staged to evoke the violent demise of Edward II, and it’s evident that the mastermind plans to strike again.