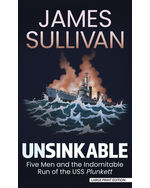 
Unsinkable: Five Men and the Indomitable Run of the USS Plunkett

More than the story of a single, savage engagement, Unsinkable traces the individual journeys of five men on one ship from Casablanca in North Africa, to Sicily and Salerno in Italy and then on to Plunkett‘s defining moment at Anzio, where German bombers bore down on the ship in an assault so savage, so prolonged, and so deadly that one Navy commander was hard-pressed to think of another destroyer that had endured what Plunkett had. Based on Navy logs, war diaries, and interviews, Unsinkable is a timeless evocation of young men stepping up to the defining experience of their lives.