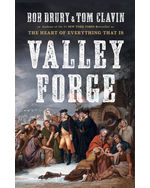 December 1777. Eighteen months after the signing of the Declaration of Independence, some 12,000 members of America’s beleaguered Continental Army stagger into a small Pennsylvania encampment northwest of British-occupied Philadelphia. The starving and half-naked force is reeling from a string of demoralizing defeats by King George III’s army, and barely equipped to survive the winter. Their commander in chief, George Washington, is at the lowest ebb of his military career: the Continental Congress is in exile and the American Revolution appears to be lost. Yet a spark remains. Valley Forge is the riveting true story of a nascent United States toppling an empire.