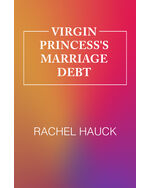 At an opulent Paris ball, billionaire Theo Tersi sees Princess Sofia. She abandoned him once, rejecting the future they’d planned — and he wants an explanation! But when they lock eyes, Theo’s careful plans explode in the fire of their still-intense connection.

The truth? Devastated Sofia was forced to return to her royal duties all those years ago. But now Theo has created a scandal, and he’ll take back what’s his and claim Sofia — as his bride! Can their enduring bond overcome his quest for passionate revenge?