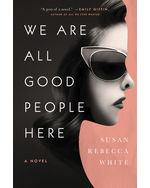 We Are All Good People Here

Eve Whalen meets Daniella Gold in the fall of 1962, on their first day at Belmont College. They are paired as roommates and despite coming from two very different worlds, they become fast friends. That is, until the girls’ expanding awareness of the South’s caste system forces them to question everything they thought they knew about the world and their places in it. Eve veers toward radicalism — a choice pragmatic Daniella cannot fathom. After a tragedy, Eve returns to Daniella for help in beginning anew, hoping to shed her past. But the past isn’t so easily buried, as Daniella and Eve discover when their daughters are caught up in secrets meant to stay hidden.