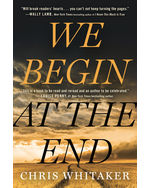 
We Begin at the End

Duchess Day Radley is a thirteen-year-old self-proclaimed outlaw. She might be a badass, but she’s just trying to survive. She is the fierce protector of her five-year-old brother, and parent to her mother, Star, a single mom incapable of taking care of herself. Walk has never left the coastal California town where he and Star grew up. He’s the chief of police, but he’s still trying to heal the old wound of having given the testimony that sent his best friend, Vincent King, to prison decades before. Now, Vincent is being released. As soon as he steps foot back into his childhood town, trouble arrives, and Walk and Duchess will be unable to do anything but usher it in.