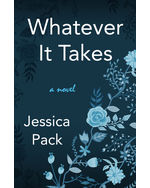 Sienna has no memory of her late mother, yet every significant day of her life has been marked by a letter written during her last weeks of life. Her father feels grateful to offer these connections to the loving, talented woman his daughter never knew. For Sienna, the letters have become a dreaded burden. When she finds a lump, Sienna begins to ask questions about her mother’s terminal illness — questions that reveal inconsistencies in the stories she’s been told. The deeper she digs, the more the image of her mother as a contented homemaker warps into something much darker and far more troubling. If Sienna’s dad lied about this, what else did he lie about?