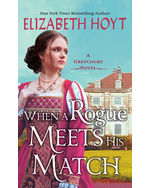 
When a Rogue Meets His Match

Ambitious, sly, and lethally intelligent, Gideon Hawthorne has spent the last ten years acting as the Duke of Windemere’s fixer. Now Gideon’s ready to quit. But Windermere tempts Gideon with an irresistible offer: one last task for Messalina Greycourt’s hand in marriage. Vivacious Messalina Greycourt is appalled when her uncle demands she marry Mr. Hawthorne. But Gideon offers her protection and freedom in exchange for a true marriage. Messalina feigns agreement, but the more time she spends with Gideon, the more he arouses her affections. Will Gideon’s final deed for Windemere destroy the love growing between them?