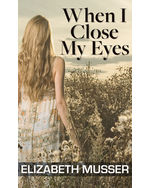 When I Close My Eyes

There is one story that novelist Josephine Bourdillon shirked from writing. And now she may never have a chance. Trapped in her memories, she lies in a coma. The man who put her there is just as paralyzed. Former soldier Henry Hughes failed to complete the kill. What's more: he never received full payment — funds that would ensure surgery for his son. As detectives investigate, a young but not-so-naïve Paige Bourdillon turns to her mother's turbulent past for answers. Could The Awful Year be worse than the one they're living now? When I Close My Eyes tells the story of two families struggling with dysfunction and finding that love is stronger than death.