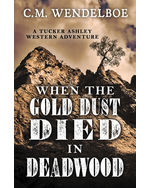 
When the Gold Dust Died in Deadwood

Fresh out of the Territorial Prison, Tucker Ashley and his friend Jack stake a claim during the Black Hills gold rush. But it has been jumped by two men. Jack and Tucker are confronted by Rule Enforcers for the Mining District, Zell McGinty and his son, Trait, a gunman known for his ruthlessness. Tucker’s gun handling skills have deteriorated in prison, and he and Jack are powerless to resist them and are forced off their claim. Miners all along the Gulch have been killed — Indians blamed — until Tucker finds that the dead miners had been murdered by the McGintys’ for their claims. When the McGintys learn Tucker has uncovered their scheme, Trait hunts him. But Tucker’s legendary skills with a pistol have to be relearned, all the while looking over his shoulder, waiting to be confronted by the deadly gunman. And only one of them walks away.

Backed to the Wall 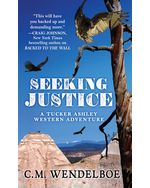