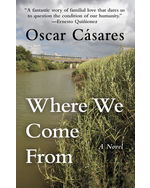 Where We Come From

The towns along the U.S.-Mexican border have dangerous reputations — on one side, drug cartels; on the other, zealous border patrol agents — and Brownsville is no different. But to twelve-year-old Orly, it's simply where his godmother Nina lives — and where he is being forced to stay after his mother's sudden death. Nina is providing refuge for a young immigrant boy named Daniel, for whom traveling to America has meant trading one set of dangers for another. Separated from the violent human traffickers who brought him across the border and pursued by the authorities, Daniel must stay completely hidden. But Orly's arrival threatens to put them all at risk of exposure.