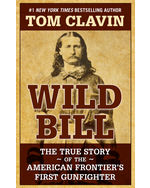 James Butler Hickok was known across the frontier as a soldier, Union spy, scout, lawman, gunfighter, gambler, showman, and actor. But in July 1865, "Wild Bill" Hickok shot and killed Davis Tutt in Springfield, MO — the first quick-draw duel on the frontier. Thus began the reputation that made him a marked man to every gunslinger in the Wild West. Even before his death in 1876, Wild Bill became a legend, and he is brought fully to life in this rip-roaring, spellbinding true story.