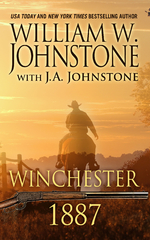 From America's most popular Western writers, each novel in this brilliant new series follows the trail of a different gun — each with its own fiery story to tell.

Young James Mann came from Texas to find his missing uncle in the lawless Indian Territory. His father followed, and they've earned the wrath of the vicious McCoy-Maxwell gang. But the Manns have a secret weapon: Deputy Marshal Jackson Sixpersons carries a 12-gauge, lever-action Winchester shotgun which will blow a hole in the outlaw gang.