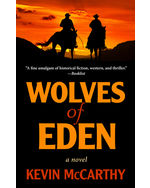 Dakota Territory, 1866. Following the murders of a frontier fort’s politically connected sutler and his wife in their illicit brothel, Lieutenant Martin Molloy is ordered to track down the killers and return with “boots for the gallows” to appease Washington. Meanwhile, Irish immigrant brothers Michael and Thomas O’Driscoll return from the front lines of the Civil War. Unable to adapt to life as farm laborers, they reenlist and are thrown into merciless combat with Red Cloud’s coalition of Native tribes in Montana’s Powder River Valley. Amidst the daily carnage, Thomas finds love — which leads to a moment of violence that will change the brothers’ lives forever.