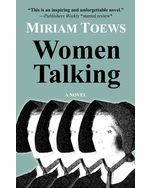 One evening, eight Mennonite women climb into a hay loft to conduct a secret meeting. For the past two years, each of them — and more than a hundred other girls in their colony — has been repeatedly violated in the night by demons punishing them for their sins. Now the women have learned they were in fact drugged and attacked by men from their own community, and they’re determined to protect themselves and their daughters from future harm. But should they stay in the only world they’ve ever known, or should they dare to escape? Based on real events, Toews’ masterful novel uses wry, politically engaged humor to relate this tale of women claiming their power to decide.

“Astonishing . . . Toews, who has written often about her own Mennonite history, has told a riveting story that is both intensely specific and painfully resonant in the wider world. WOMEN TALKING is essential, elemental.”

“A feminist manifesto that delicately unwraps the horror, but also bubbles with the love and wry humor that has endeared Toews to her readers . . . Toews’ celebrated novels are haunted by her upbringing, but she has never written with such heartbreak, or taken such sure aim at fundamentalism and its hypocrisies, as she does in her new book, WOMEN TALKING . . . Did I mention the book is funny? Wickedly so, with Toews’s brand of seditious wit.”

“Astonishing . . . a work of deep moral intelligence, a master class in ethics beautifully dressed as a novel. . . . The intelligence on display in WOMEN TALKING is as ferocious as it is warm.”