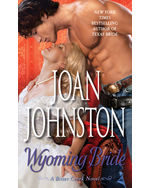 After three months in a mail-order marriage, Hannah Wentworth McMurtry is a widow — pregnant, alone, and near death in the Wyoming wilderness. Though she is saved by Flint Creed, a man with a face cut from stone, she still grieves the husband who died on their journey west. Hannah needs a husband, but does she dare marry another stranger?

Flint Creed has also lost someone he loved — when the woman he hoped to marry chose his younger brother instead. Now he must find a ranch wife of his own. But every female in the remote Wyoming Territory is too old, too young, or already married . . . until he discovers Hannah on the prairie. Flint doesn’t pretend to love her, but he doesn’t tell her he loves another woman, either. Hannah doesn’t pretend to love him, but she doesn’t tell him about the child she carries. Though danger surrounds them on the Wyoming frontier, the greatest threats of all are the secrets within — revelations that could destroy the new life Hannah and Flint have begun to cherish.

“There is no doubt Johnston knows how to craft a realistic, entertaining, sensual love story, or that the Old West she describes is a powerful portrait of a time and place.”