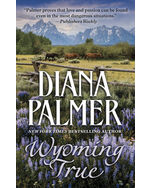 Jake McGuire has worked hard to earn his success, with holdings that include ranches and a private jet. The only threat to his comfortable existence is the last woman he should ever want. He knows Ida Merridan by reputation only, but the stories he’s heard are enough for him to keep her at arm’s length, until the day fate puts her in his path under circumstances only the most heartless cowboy could ignore. Now, realizing the truth Ida’s been keeping, he’s powerless to give her up.

Twice married and independently wealthy, Ida did nothing to deserve her bad reputation — except choose the wrong husbands. Live and learn in a small town, but after everything life has handed her, she’s in no hurry to make any more mistakes or be anyone’s object of pity. Being rescued by Jake throws a wrench into her plans for a solitary existence when one sizzling kiss leads to another, but her past is catching up with her, and there’s only so much she can do when Jake is determined to prove there are still some heroes left in the West.