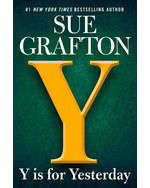 Y Is For Yesterday

In 1979, four teenage boys from an elite private school sexually assaulted a fourteen-year-old classmate — on film. After the tape went missing, another classmate was murdered. Now it’s 1989, and one of the perpetrators has been released. He’s a virtual prisoner of his watchful parents — until a copy of the tape arrives with a ransom demand.

“This will leave readers both relishing another masterful entry and ruing the near-end of this series. Prime Grafton.”

“The series may be coming to a close, but Grafton (W Is for Wasted) constructs an intricate plot following two time lines with at least a dozen characters in play while rarely slowing the pace.”

“Grafton once again proves herself a superb storyteller.”