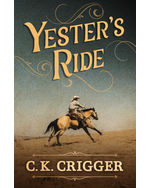 Ketta Noonan, her mother's child by rape, has been kidnapped by the twelve-year-old's father. Big Joe Noonan, her mother's husband, is glad she's gone. He's always detested the child as evidence of her mother's violation and kept her hidden away. But Yester Noonan, four years older than Ketta, is fond of his half-sister, even if she is part Chinese, and when his mother begs him to rescue her, he rides out on this quest. Accompanied by his Metis friend, Nat Fontaine, the two sixteen-year-olds take on a man's role. As for Ketta? She's not too shabby either, when it comes to tough.