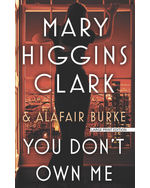 
You Don't Own Me

Television producer Laurie Moran is approached by the parents of Dr. Martin Bell, a physician who was shot dead as he pulled into the driveway of his Greenwich Village carriage house five years ago. The Bells are sure that Martin’s disgraced and erratic wife, Kendra, carried out the murder. Determined to prove Kendra’s guilt and win custody over their grandchildren, they plead with Laurie to feature their son’s case on Under Suspicion, ensuring her that Kendra is willing to cooperate.

As Laurie dives into the case, she learns that Martin wasn’t the picture-perfect husband, father, and doctor he appeared to be and was carrying secrets of his own. What does the web of lies ensnaring the Bell family have to do with a dangerous stranger, who gazes at Laurie from afar and thinks, She is actually quite a lovely girl, I’m sure she’s going to be missed. . . ?