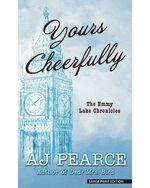 London, 1941. Emmeline Lake takes on the challenge of becoming a young wartime advice columnist for Woman’s Friend magazine, while Emmy’s best friend Bunty is bravely looking to the future. When the Ministry of Information calls on Britain’s women’s magazines to help recruit desperately needed female workers to the war effort, Emmy is thrilled to be asked to help. But when she and Bunty meet a young woman who shows them the very real challenges that women war workers face, Emmy must tackle a dilemma between doing her duty and standing by her friends.