‘Decolonizing’ of historical collections or educational resources describes surfacing diverse content and revisiting its meaning from a contemporary perspective. It is related to Revisiting Collections, a collaborative approach to reinterpreting collections by ‘capturing and sharing multiple perspectives on archive collections’.

‘Decolonizing’ is an active point of discussion within the media, in heritage, and in academic research.

The quotation was cited within the UAL Call for proposals from the Decolonising the Arts Institute.

Whilst not all aspects will be present in the collections, these have been used where possible to help identify, select and categorize diverse content from Illustrated London News Historical Archive.

A NOTE ON HISTORICAL DESCRIPTIONS

Some of the historical terms used within the publications and indeed descriptive metadata will be out of date, and in some cases offensive to modern considerations of identity and protected characteristics, along with their context and how they are described. These have been used here to surface relevant content from the historical context, for example, Colonial, Colonialism, Africa, India, Indies, China, Asia, Japan, African, Negro, Indian, Native, Tribe, Tribal, Caribbean, Chinese, Asian, Japanese, exotic, oriental. It should also be noted that the use of ‘queer’ in these historical resources will usually surface content and people considered unusual by culture, faith, or lifestyle, rather than specific to LGBTQ+ histories. 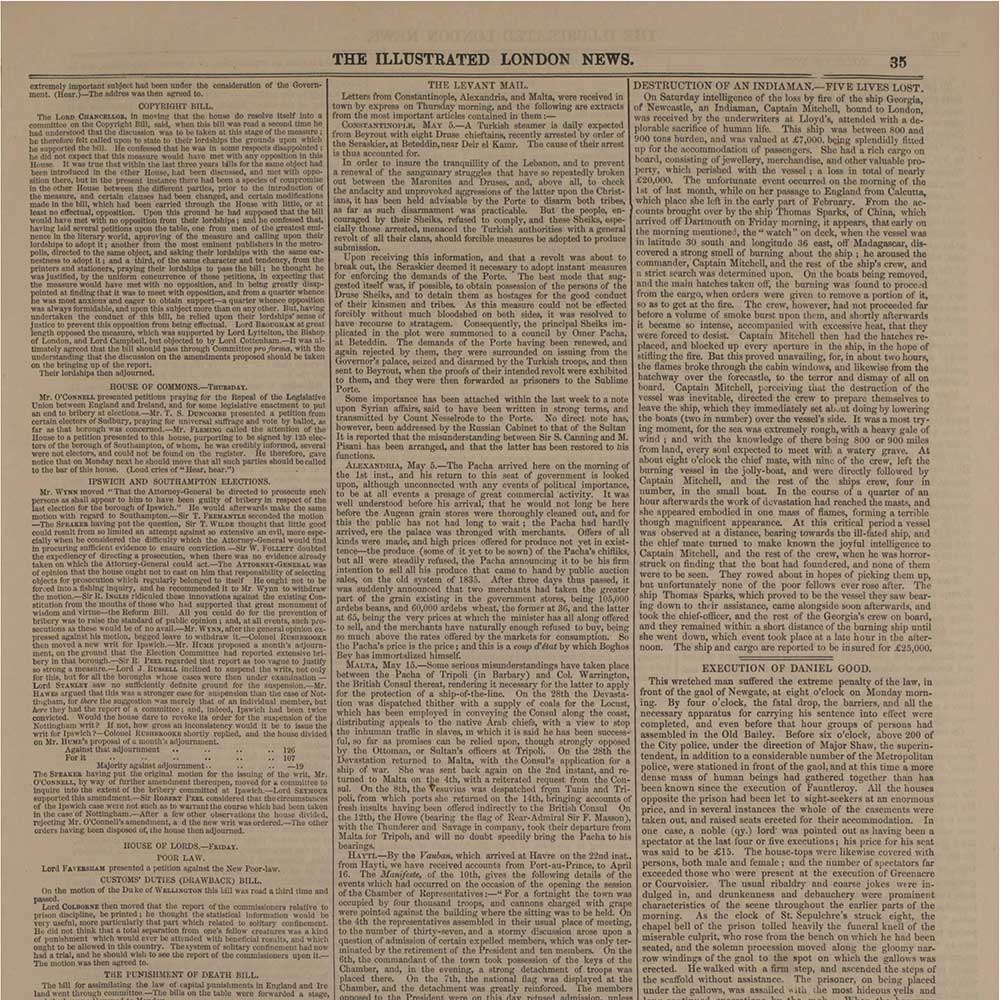 Execution of Daniel Good: Article describing scenes at the execution, including a description of the behaviour of the crowd, and graphic detail of the hanging. “The usual ribaldry and coarse jokes were indulged in, and drunkenness and debauchery were prominent characteristics of the scene throughout the earlier parts of the morning. As the clock of St. Sepulchre's struck eight, the chapel bell of the prison tolled heavily the funeral knell of the miserable culprit, who rose from the bench on which he had been seated, and the solemn procession moved along the gloomy narrow windings of the gaol to the spot on which the gallows was erected. He walked with a firm step and ascended the steps of the scaffold without assistance. The prisoner, on being placed under the gallows, was assailed with the most hideous yells and long-continued execrations by the mob. “ 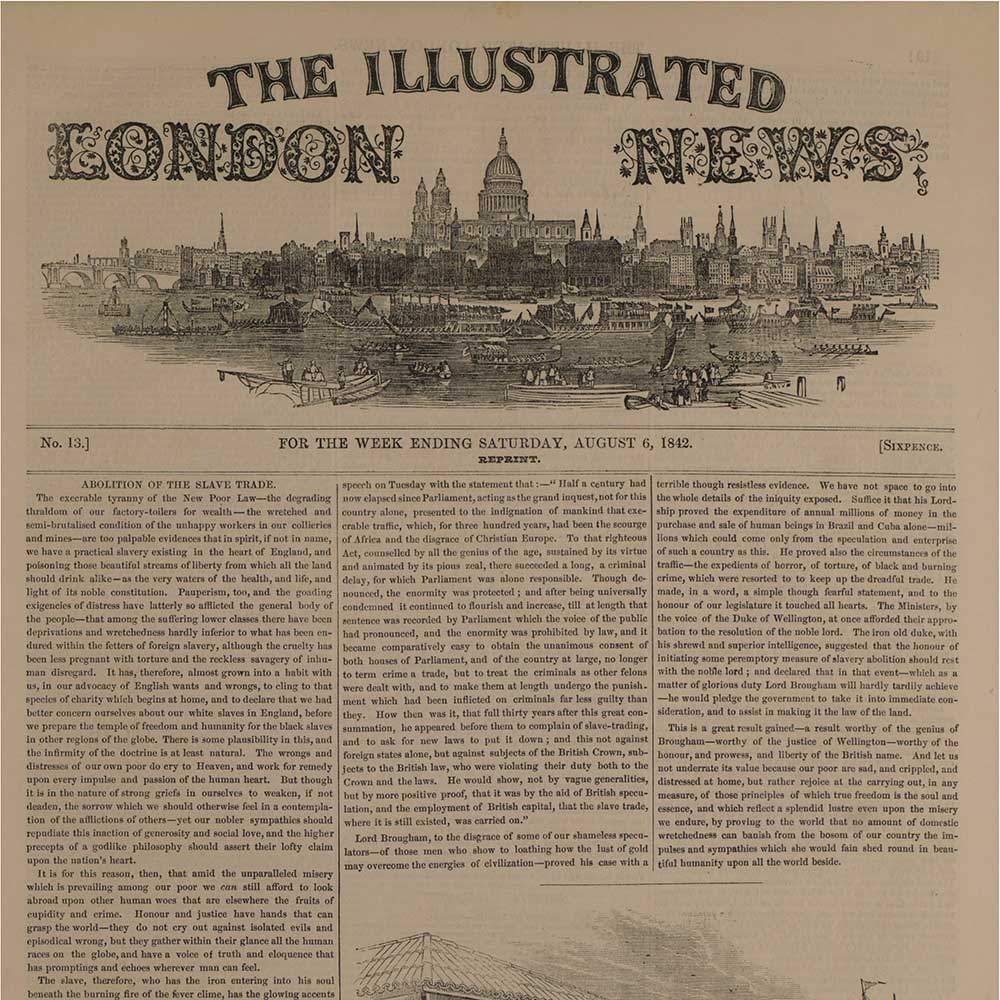 Abolition of the Slave Trade: Article comparing the treatment of British workers with treatment of slaves and foreign workers. The article describes, ‘The execrable tyranny of the New Poor Law-the degrading thraldom of our factory-toilers for wealth-the wretched and semi-brutalised condition of the unhappy workers in our collieries and mines-are too palpable…’ It goes on to describe, ‘which closely, in our humble opinion, approximate to the crimes that are perpetrated by the slave-trade itself. Here are groups of that particular class of labourers which, in the East Indies, are termed hill coolies-inveigled from their native clime and home, and imported for the purpose of working out in a species of slave labour’. With illustration of ‘Hill Coolies arriving at the Mauritius’. 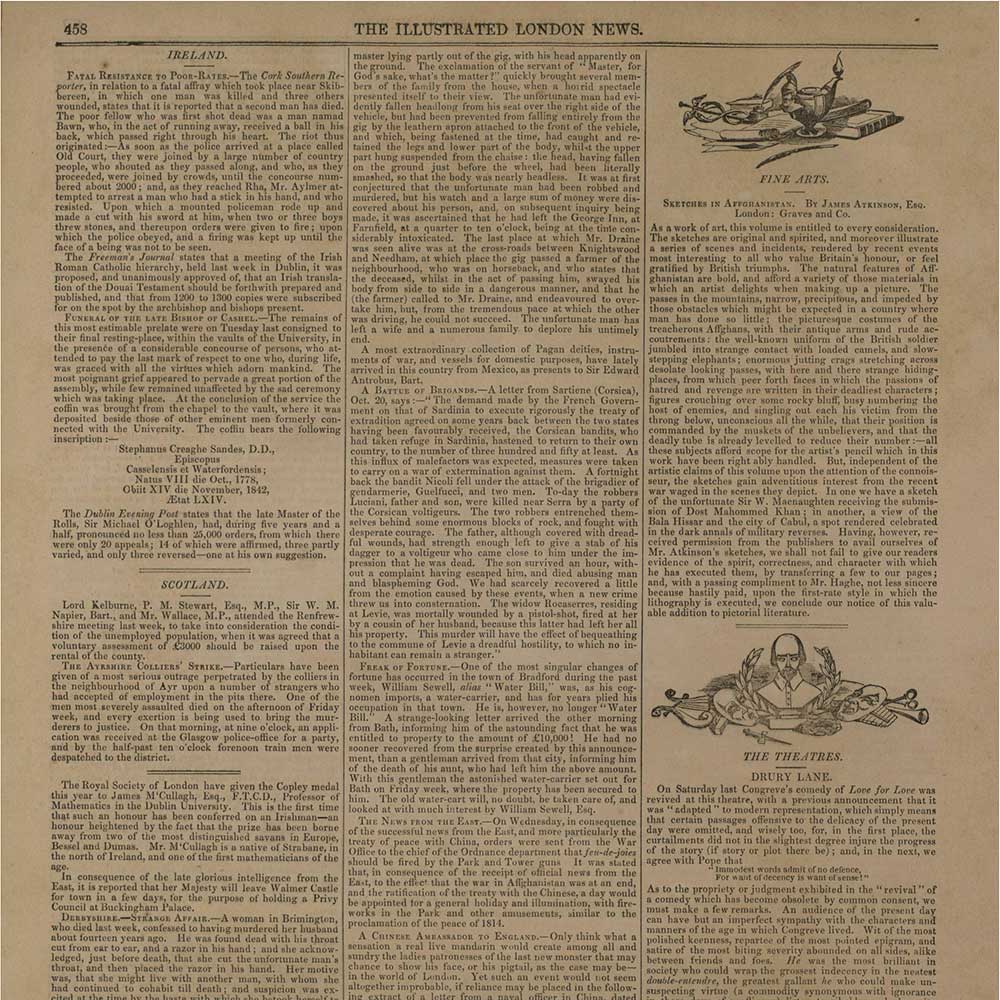 Theatre review of an adaptation of ‘Love for Love’ by William Congreve. The item notes that the play had been adapted for a modern audience, as ‘certain passages offensive to the delicacy of the present day were omitted’. However, the reviewer notes that Congreve himself ‘could wrap the grossest indecency in the neatest double-entendre, the greatest gallant he who could make unsuspecting virtue (a commodity synonymous with ignorance in those days of profligacy) listen to ribaldry and obscenity without a blush’. 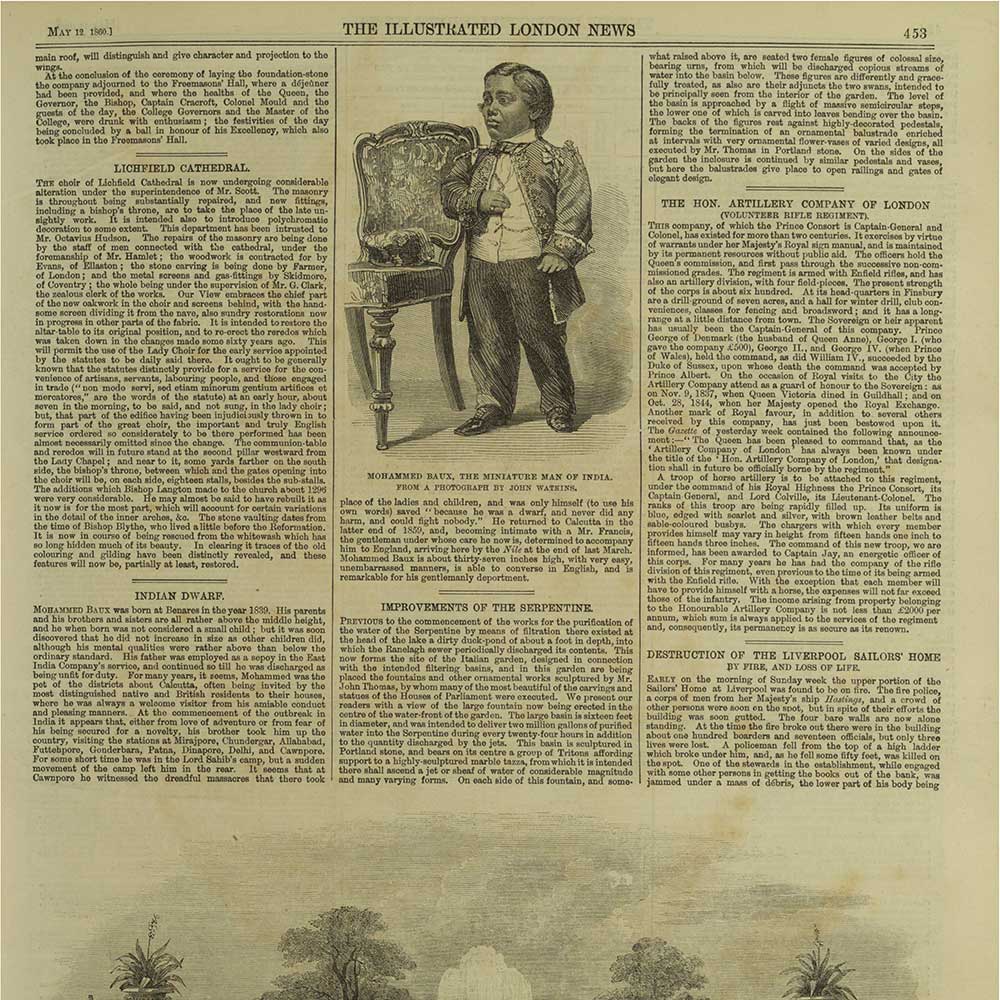 Mohammed Baux, an Indian 'dwarf' born in Benares in 1839. Baux was 37 inches high and was pictured when touring England. From an item describing his tour of India. ‘His father was employed as a sepoy in the East India Company’s service.’ 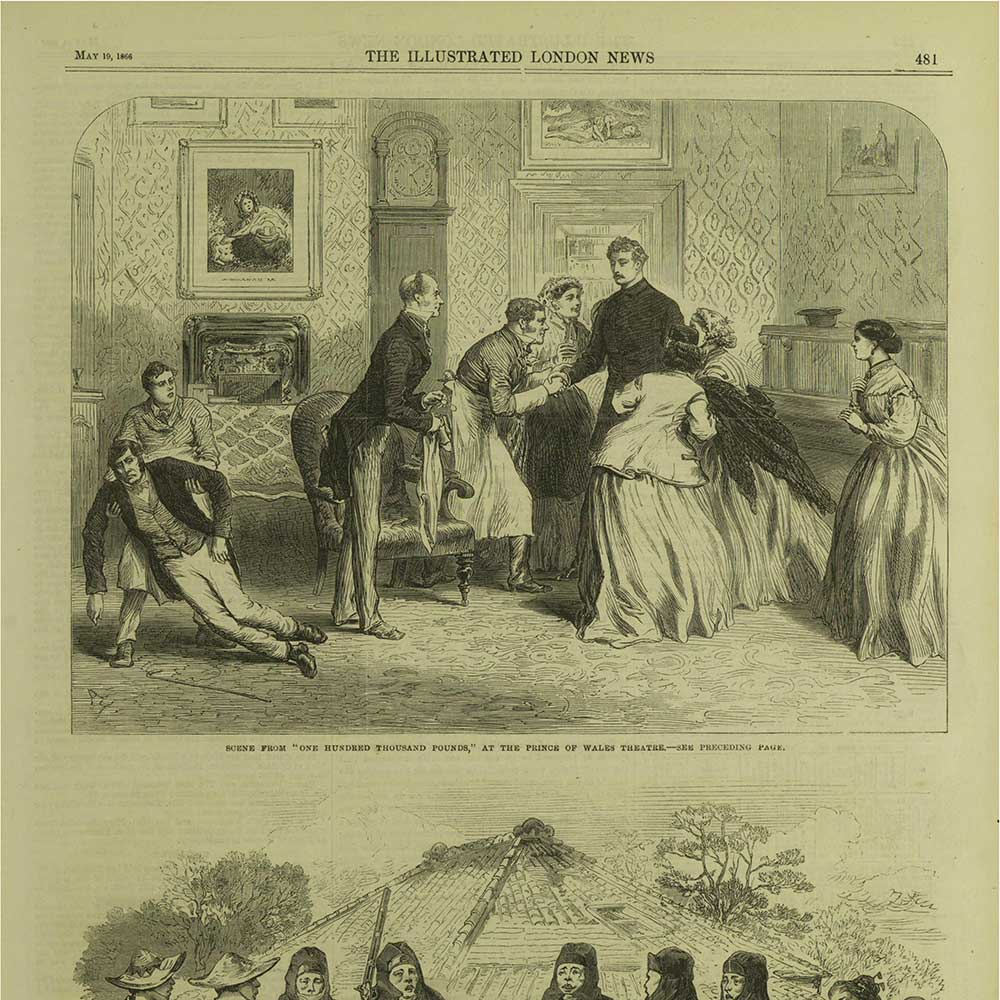 Japanese Soldiers in European Costume at Yokohama: Illustration relating to article, which describes ‘influence of European example on the costumes, if not the customs, of the Japanese is daily becoming more apparent; and some of the troops of the Tycoon's army. being now dressed in a queer imitation of the uniforms of our soldiers, combined with certain features of the characteristic attire of our sailors, present the strangest possible figures in the streets of Yokohama…’ 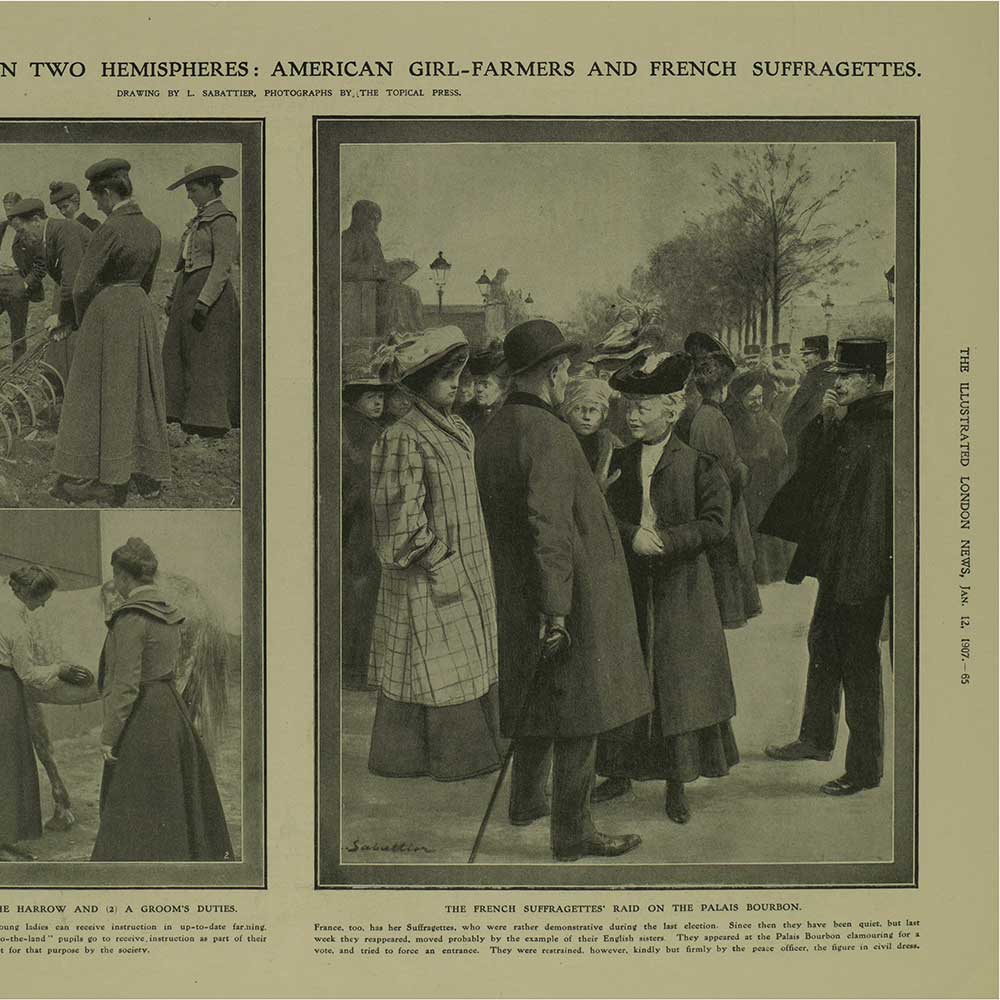 The Woman's Movement in Two Hemispheres: American Girl-Farmers and French Suffragettes. Item with photographs and description, ‘ American Girls Learning (1) The Use Of The Harrow and (2) A Groom's Duties. A school has been started by several influential Philadelphians where young ladies can receive instruction in up-to-date farming.’ And an illustration with description, ‘The French Suffragettes' Raid on The Palais Bourbon. France, too, has her Suffragettes, who were rather demonstrative during the last election. Since then they have been quiet, but last week they reappeared, moved probably by the example of their English sisters.’ 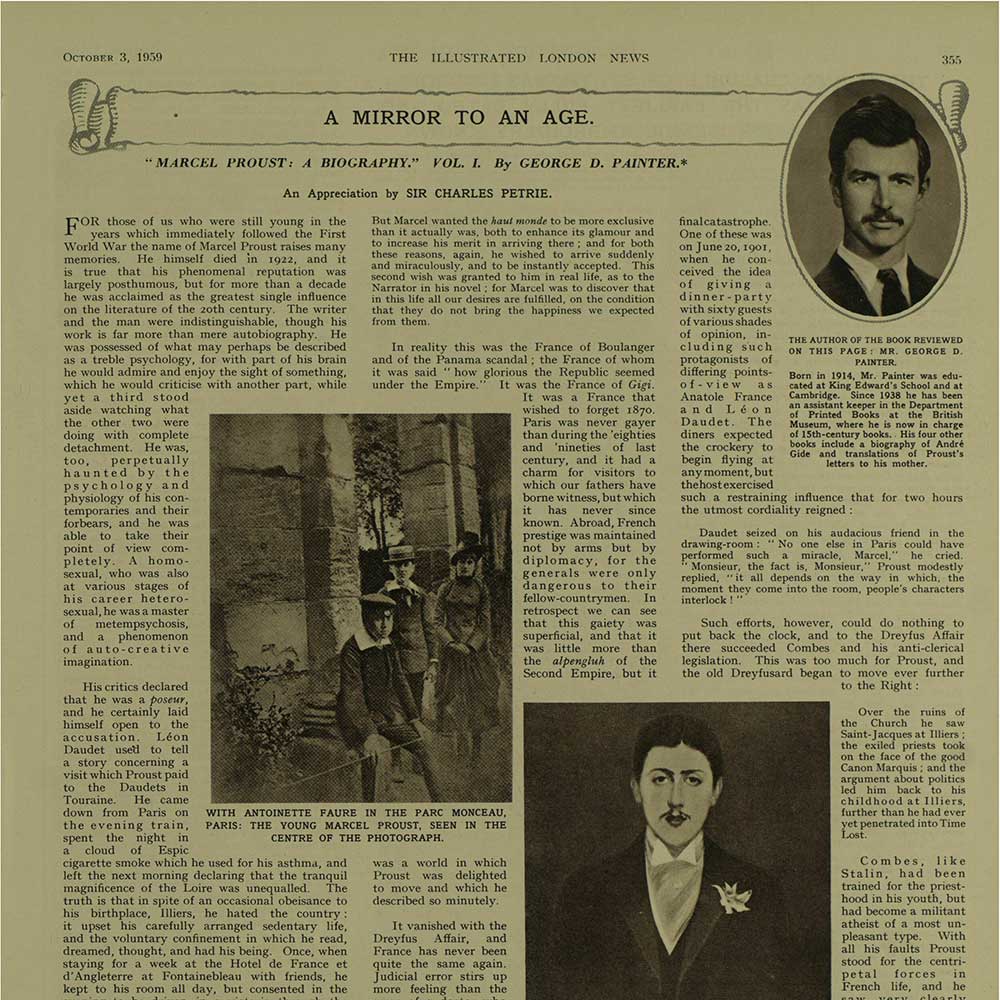 A Mirror to an Age: Article and review written by Charles Petrie, of a biography of Marcel Proust, by George D Painter. With portrait of Proust, photograph as a child, and photograph of George D Painter. The article notes that Proust was a homosexual, and ‘at various stages in his career heterosexual’. 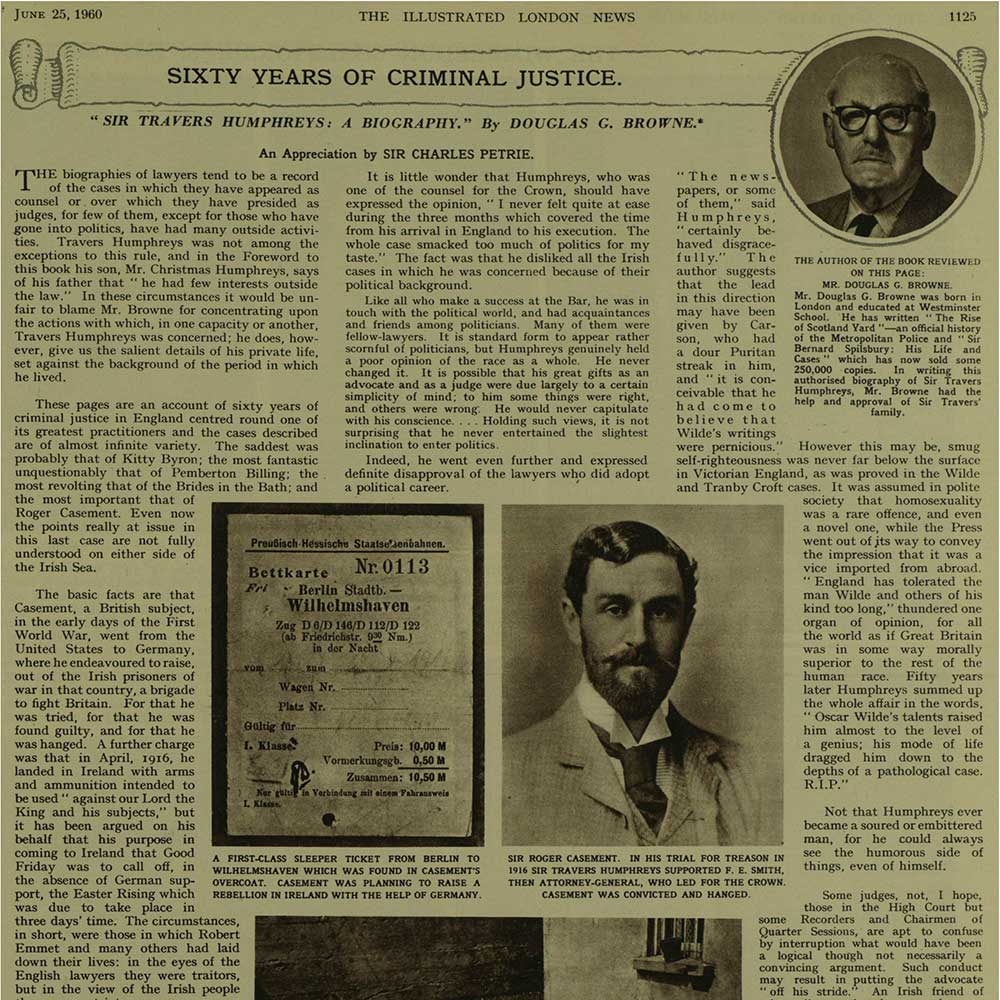 Sixty years of criminal justice: Article and review written by Charles Petrie, of a biography of Sir Charles Humphries, by Douglas G Browne. The article discusses the case of Sir Roger Casement, whose diaries, ‘covering the years when he was in the Colonial Service which, if they were genuine, proved him to have been an active homosexual. He was not charged with any such offence, nor should it have mattered whether he was addicted to such practices or not…’ 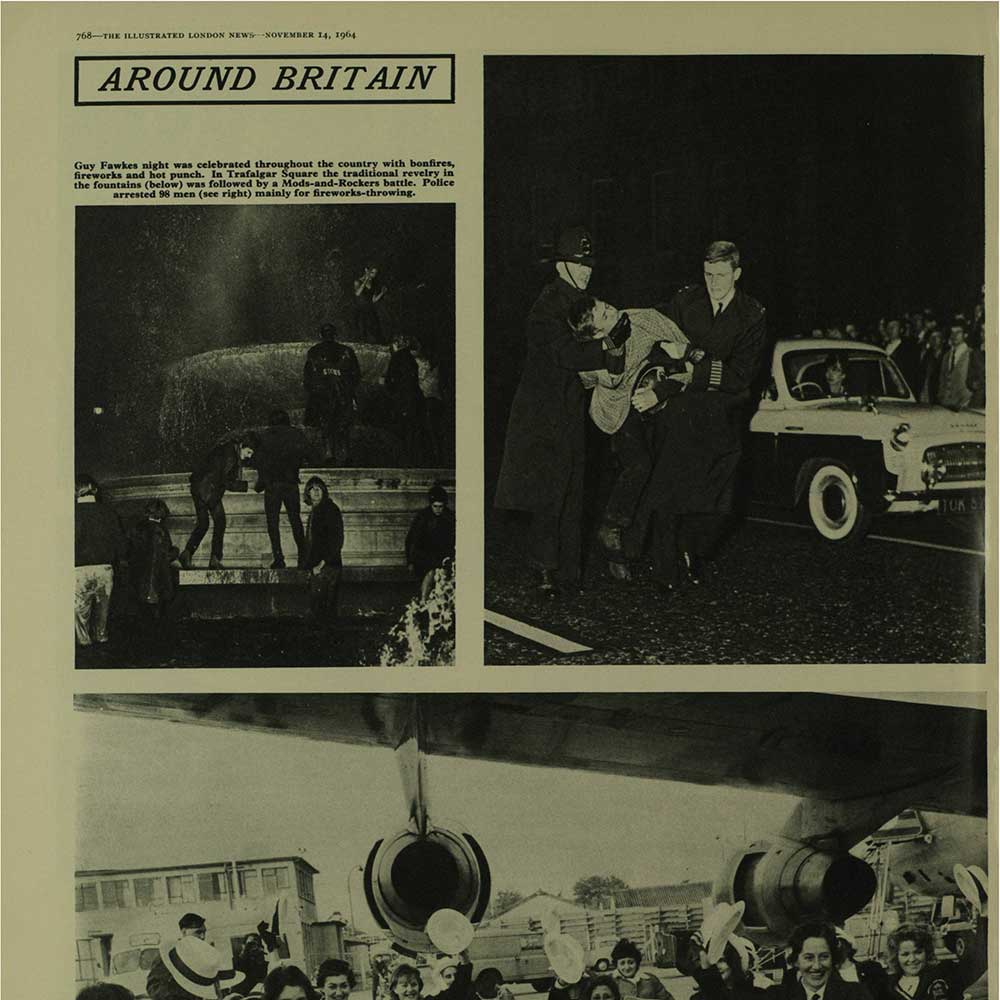 Photograph of Paralympians (described here as Paraplegics) departing from Stoke Mandeville Hospital on their trip to Tokyo. From a section, ‘Around Britain’. 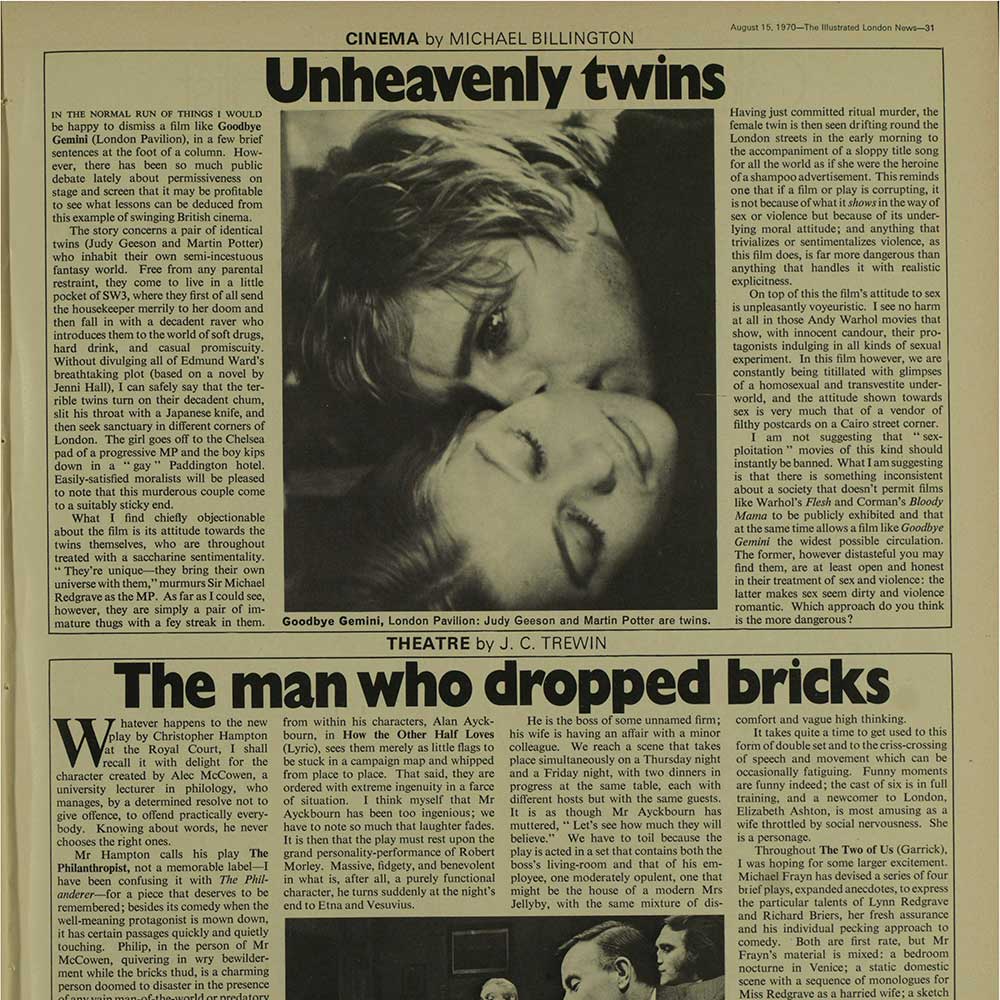 Unheavenly twins: Cinema review of ‘Goodbye Gemini’ by Michael Billington. With descriptions of the incestuous relationship, violence, and murder. Billington notes that, ‘ the film's attitude to sex is unpleasantly voyeuristic… we are constantly being titillated with glimpses of a homosexual and transvestite underworld, and the attitude shown towards sex is very much that of a vendor of filthy postcards on a Cairo street corner.’ 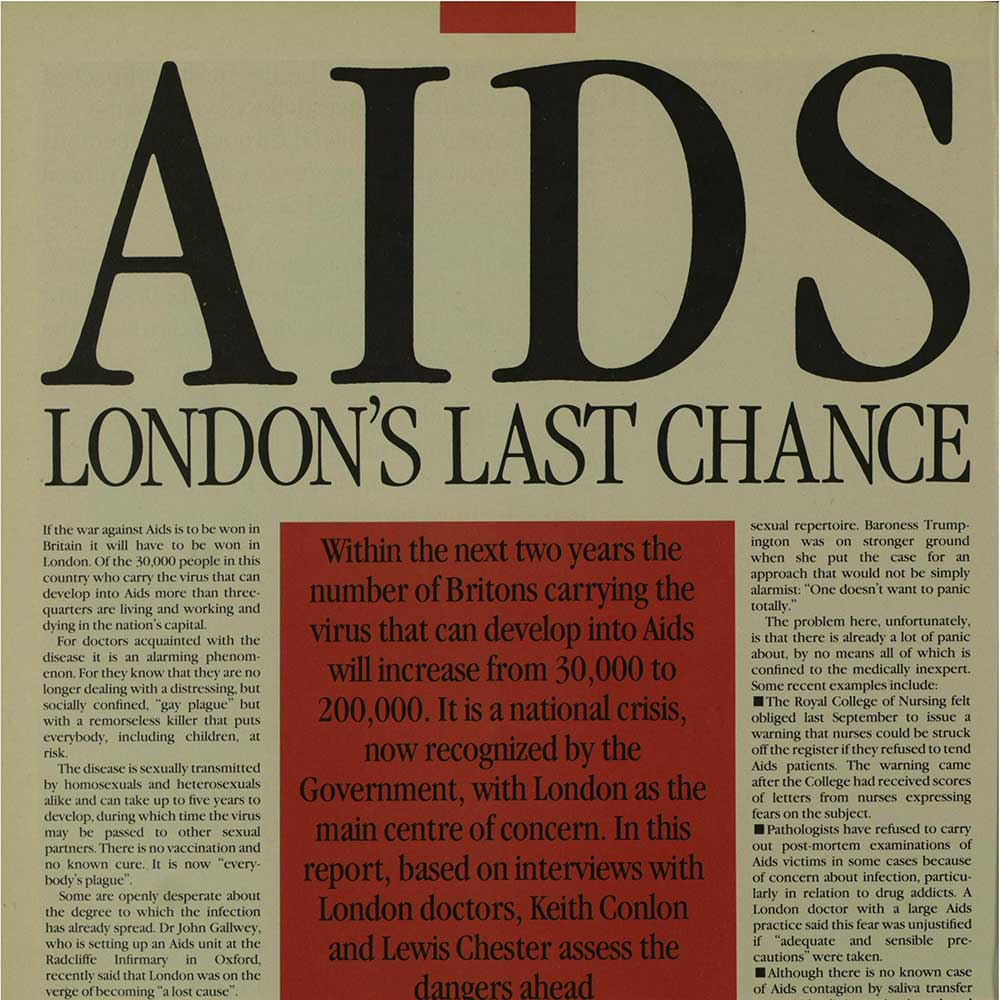 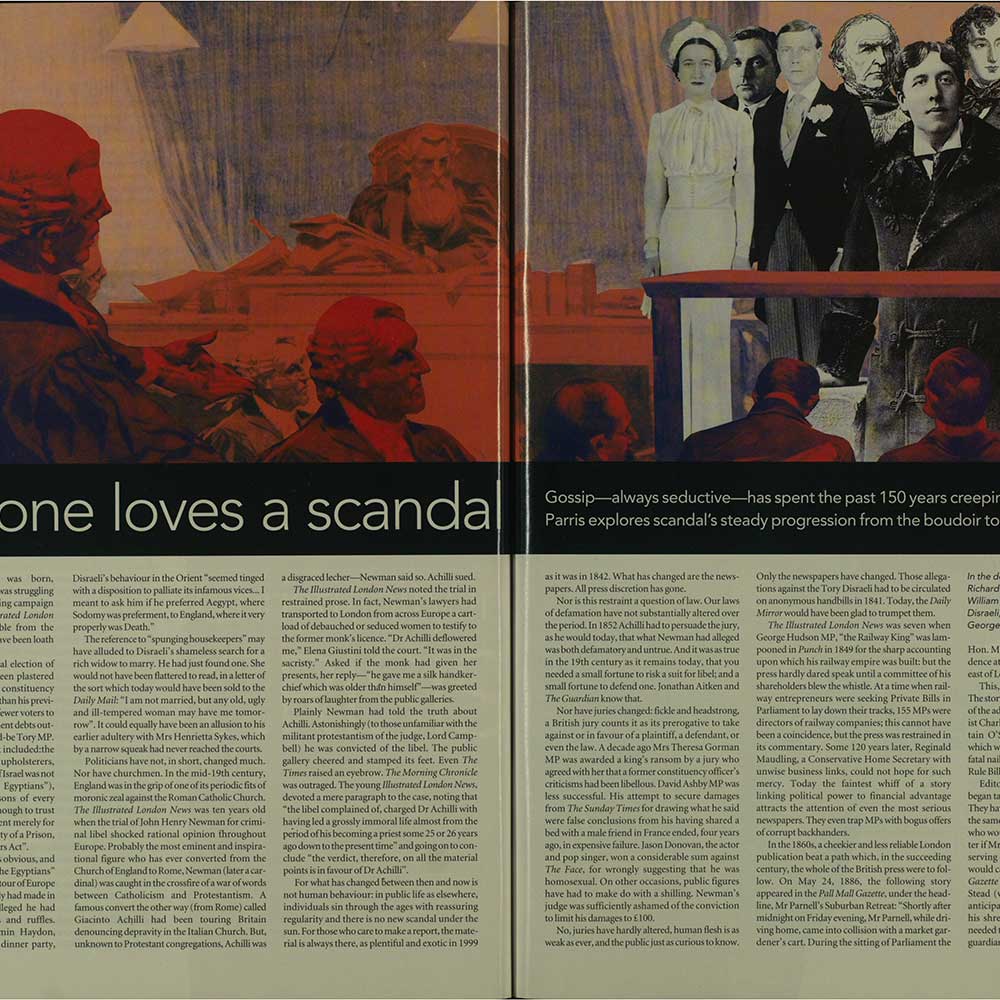 Any content, unless otherwise stated, are © Gale, a Cengage Company. Further reproduction of this content is prohibited. Any errors are those of the author.