FROM DUNKIRK TO THE FALL OF PARIS

When the Nazi army was bearing down on Paris the International Herald Tribune continued to publish after no other newspaper remained, out lasting even French papers, making it “the last free newspaper in any language to publish in Paris before the Nazi occupation of June 1940.” Because of this, the International Herald Tribune offers unique insights that cannot be found in any other primary source resource.

The first two weeks of June 1940 were some of the most significant days in modern history. As the Nazi blitzkrieg tore through the north of France, British and French soldiers alike had been routed and surrounded in the port town of Dunkirk – not knowing the miraculous evacuation that awaited them.

Throughout this dire situation, almost all French newspapers ceased operations and stopped publishing – a precaution taken because France was under duress of total war. Knowing their unique position of providing information to Americans still in France, the International Herald Tribune persisted and published issues right up to the Nazi ground assault on Paris.

Browse the issues and articles below for primary source coverage of the Dunkirk evacuation and the Nazi invasion of France. 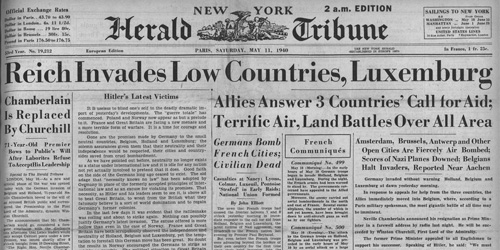 Our story begins with the end of the Phoney War. The Wehrmacht began their blitzkrieg marching through Belgium and the Netherlands into France. This marked the beginning of the Battle of France. In one month's time International Herald Tribune would shut down and the four year Nazi occupation of Paris would begin. 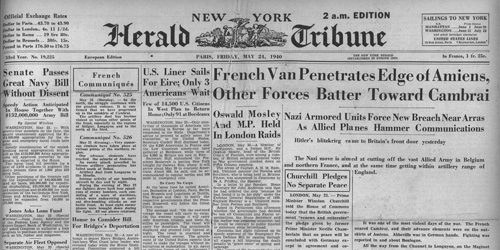 When the Phoney War broke out in September 1939, the International Herald Tribune was cut from eight to four pages due to war rationing.

On May 24, 1940, the International Herald Tribune was forced to reduce the pages of each paper from four to two (a single piece of paper front and back) due to even tighter rationing. Sections of the paper are now entirely blank due to war time censorship to protect sensitive information. 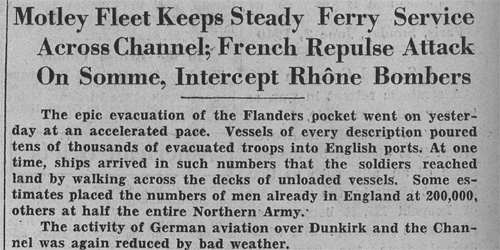 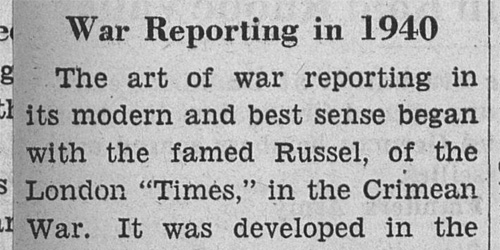 Editorials from the two weeks leading up to the Nazi occupation of Paris and shut down of the the paper are incredible vestiges of the International Herald Tribune’s pre-war spirit. On June 3, 1940, the editorial laments the restrictions on war reporting, complaining that future historians looking to study newspapers will be hindered by censorship. |  See it in the product 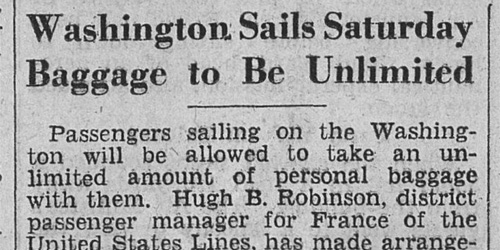 The back page of the issue is a mix of news and information for Americans still in Paris. One column informs readers that a cruise ship departing to the US is offering unlimited personal baggage to those fleeing the conflict.  |  See it in the product 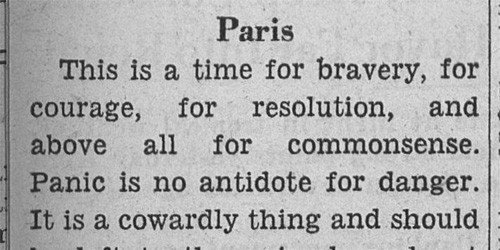 The front-page reports that in the past 24 hours the French dropped 100 metric tons of bombs on German armoured vehicles, but it would not be enough. As the fighting outside of the city intensified, so too did the tenor of the editorials. The June 7, 1940 editorial is testament to the spirit of Paris and Parisians.  |  See it in the product

On June 7, 1940, the soldiers who just a week ago were awaiting a miraculous evacuation from the beaches of Dunkirk were home in the relative safety of Great Britain. In France, the fighting intensified, the German army threw in their reserves and 2,000 Nazi tanks were pummeling the French defenses north of Paris. In four days, the Nazi army would be marching down the Champs-Élysées and the International Herald Tribune would cease production for four years. Undeterred by the increasingly perilous situation editors and writers at the International Herald Tribune remained. 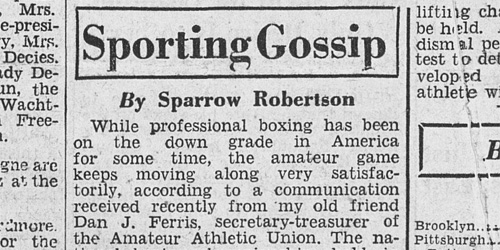 Despite the continued and growing threat of the looming Nazi invasion, the International Herald Tribune continued to publish the Sporting Gossip column written by the legendary Sparrow Robertson.  |  See it in the product 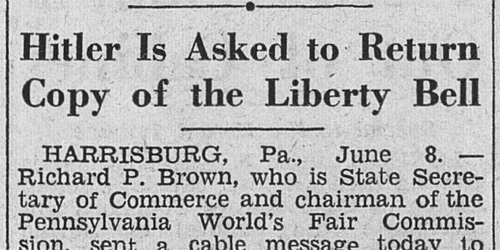 While reports on the front page were dedicated to reports French army “stubbornly [battling] for every inch,” a story ran on the back of the single sheet issue with the headline “Hitler Is asked to Return Copy of the Liberty Bell”.  |  See it in the product 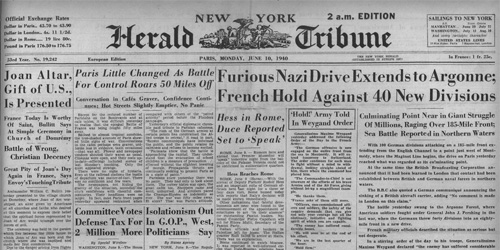 On June 10, the French government fled the city as the Nazi invasion of Paris became imminent.

On this day the International Herald Tribune published an article above the fold titled “Paris Little Changed As Battle for Control Roars 50 Miles Off,” describing the mood of the city, “There were no signs of hysteria. Even at the railroad stations the bustle of departure was matter-of-fact. There was no confusion and few tears.” By the time the issue hit newsstands all of that would be changed.

Any content, unless otherwise stated, are © Gale, a Cengage Company. Further reproduction of this content is prohibited. Any errors are those of the author.