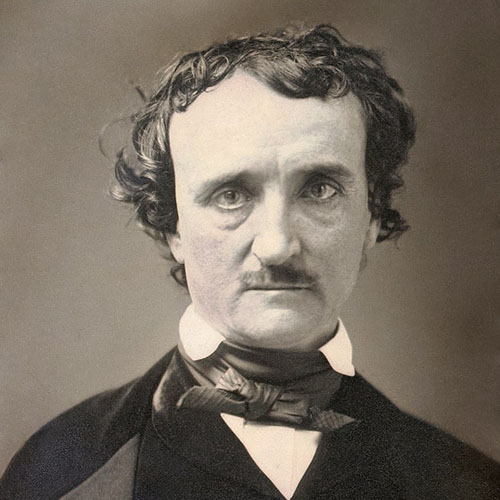 Edgar Allan Poe was an American writer of primarily poetry and short stories that explored themes of death, regret, and lost love. Read the overview below to gain an understanding of the author and his work and explore the previews of analysis and criticism that invite further interpretation.

Known for his keen intellect and vivid, often macabre imagination, Edgar Allan Poe is regarded by many scholars as one of the most groundbreaking authors of early-nineteenth-century America. Although Poe is remembered by most readers as the author of such stories as "The Tell-Tale Heart" and "The Fall of the House of Usher," critics recognize him for the versatility and range of his talents.

A number of commentators have credited Poe with inventing the modem detective story; indeed, many of his principal techniques, particularly his use of deductive reasoning to elucidate the complexities of criminal behavior, form the foundation of the crime genre. At the same time, Poe's in-depth explorations of the interior lives of his characters helped pave the way for psychological realism, inspiring a number of later fiction writers, among them Fyodor Dostoevsky. Poe's critical writings, notably those on the relationship between philosophical principles and artistic style, also influenced the aesthetic theories of Charles Baudelaire, Stephane Mallarme, and other members of the French symbolist movement.

In spite of his far-reaching impact, Poe has also had his share of detractors over the years: Henry James was intensely critical of Poe's work, while T. S. Eliot famously dismissed his writings as "pre-adolescent." The second half of the twentieth century witnessed a reevaluation of Poe's legacy, however, as modem critics and theorists began to recognize his profound effect on modem literature and thought.

Edgar Allan Poe was born in Boston on January 19, 1809, the second son of David Poe Jr. and Elizabeth Arnold Poe, both stage actors. The family lived in abject poverty and moved frequently during Poe's first years, during which time his parents pursued acting engagements in New York, Maryland, and Virginia. Poe's father abandoned the family when Poe was still a small child, and his mother died in Richmond, Virginia, in December 1811. Shortly after his mother's death, Poe was adopted by John Allan, a wealthy Richmond merchant, and his wife, Frances. In 1815 the young boy went with the Allans to Great Britain, living in Scotland and London for the next five years. After returning to Richmond in 1820, Poe attended private schools, where he excelled in literature, classics, and oratory; he also began to write poetry.

In spite of his academic accomplishments, Poe remained relatively isolated. Scholar Eric W. Carlson has argued that Poe's humble origins remained a source of shame throughout his life and that because of his background he never gained acceptance among Richmond's social elite. In 1826, Poe became a student at the University of Virginia, studying classical and modern languages. Although his adoptive father paid Poe's tuition and lodging, he refused him additional funds for books and other basic expenses. To cover his living costs, Poe turned to gambling, incurring massive debts that forced him to withdraw from the university. Unable to repair his fractured relationship with Allan, Poe moved to Boston and enlisted in the army. He published his first book of verse, Tamerlane and Other Poems: By a Bostonian (1827), around this time. A second poetry collection, Al Aaraaf Tamerlane, and Minor Poems, was published in 1829. A year later Poe, intent on launching a military career, enrolled at the United States Military Academy at West Point; financial difficulties continued to plague him, however, and he abandoned his training after only six months. His third collection of verse, Poems, By Edgar A. Poe, came out in 1831.

After living briefly in New York City, Poe settled in Baltimore, where he moved in with his aunt, Maria Clemm. In Baltimore, Poe began writing short stories, publishing several of them in the Philadelphia Saturday Courier in 1832. In 1833, his story "MS. Found in a Bottle" won first prize in a contest promoted by the Baltimore Saturday Visitor. Although the prize earned Poe $50, it ultimately did little to alleviate his financial struggles, and John Allan's death in 1834 failed to provide Poe with an adequate inheritance. Desperate for a steady income, Poe accepted an offer to become a staff writer and editor for the Southern Literary Messenger, a new magazine based in Richmond. In 1835 he moved to Richmond with his aunt and her 12-year-old daughter, Virginia Clemm. Poe married Virginia a year later, shortly before her 14th birthday.

According to most biographical accounts, Poe thrived during his tenure at the Messenger; he published more than 80 essays, poems, and reviews in the periodical, while gradually attracting a sizeable readership. In 1837, he resigned from his editorship, although he continued to contribute fiction and criticism to the magazine. For the next year Poe lived with his family in New York before relocating to Philadelphia in early 1838. During this period he published his only novel, The Narrative of Arthur Gordon Pym of Nantucket (1838), as well as several important short stories, including "Ligeia" (1838) and "The Fall of the House of Usher" (1839). In 1839 he took a position as the editor and principal literary critic of Burton's Gentleman's Magazine; he was fired a year later, however, after attempting to launch his own rival magazine.

Poe's first book of short fiction, Tales of the Grotesque and Arabesque, was published in 1840. Over the next few years Poe published two additional story collections, The Prose Romances of Edgar A. Poe, No. 1. Containing the Murders in the Rue Morgue, and The Man That Was Used Up (1843) and Tales by Edgar A. Poe (1845), as well as his most significant book of poetry, The Raven and Other Poems (1845). Virginia contracted tuberculosis during this time; she died in January 1847. Poe's own health began to deteriorate, his condition exacerbated by heavy alcohol abuse.

In the remaining two years of his life, Poe was romantically involved with a series of women and was briefly engaged to the poet Sarah Helen Whitman, but their relationship ended abruptly in late 1848. That year saw the publication of Eureka: A Prose Poem, the final work published in Poe's lifetime. His struggle to earn a living and refrain from drinking continued to take its toll. He managed to place essays, stories, and poems in various magazines and delivered lectures on poetry. Poe died in Baltimore on October 7, 1849. Although biographers speculate that his death was alcohol related, the exact cause remains unknown. A posthumous collection of prose writings, The Literati . . . Together with Marginalia, Suggestions, and Essays (1850), was published a year after his death.

To modern commentators Poe remains best known for his short stories, almost all of which were collected in three volumes published during his lifetime: Tales of the Grotesque and Arabesque, The Prose Romances of Edgar A. Poe, and Tales by Edgar A. Poe. Many scholars divide Poe's short fiction into two categories: horror tales and detective stories. Poe's horror tales typically revolve around characters who have reached states of extreme alienation, terror, and madness and often contain elements of the supernatural. In "The Tell-Tale Heart" (1843), a murderer is plagued by the persistent echo of his victim's heartbeat, compelling him to confess his crime; "The Black Cat" (1843) features a protagonist who becomes obsessed with killing his beloved pet cat; the narrator of "The Cask of Amontillado" (1846), tormented by the "thousand injuries" inflicted upon him by an old rival, achieves his long-awaited vengeance by burying his victim alive in a brick tomb. The sense of menace in other stories is far more subtle. In "Some Words with a Mummy" (1845), a revivified Egyptian mummy, speaking to a group of modern scientists, offers an ominous indictment of nineteenth-century democracy. The narrator of "Ligeia" (1838), distressed by the death of his first wife, imagines her soul's resurrection in the body of his second wife. "Ligeia" is also noteworthy in that it contains the poem "The Conqueror Worm," a dark vision of the power and inevitability of death.

Poe's detective stories concern the complex, sometimes misleading relationship between human reasoning and empirical reality. Characterized by Poe himself as tales of "ratiocination," these stories revolve around crimes so strange and inexplicable that they prove nearly impossible to solve. The best known of these works include "The Murders in the Rue Morgue" (1841), "The Mystery of Marie Roget" (1842), and "The Purloined Letter" (1845). These three stories feature the character C. Auguste Dupin, an amateur sleuth whose powers of imagination and deductive reasoning enable him to recognize crucial details that elude more conventional police inspectors. A number of scholars have asserted that Dupin became the prototype of the modem fictional detective and served as the model for such characters as Sherlock Holmes and Hercule Poirot.

In addition to his fiction, Poe authored a number of important poems over the course of his career. Although his poems are not widely read today, several are still familiar to modem readers; among the most famous are "To Helen" (1831), "Lenore" (1843), and "The Raven" (1845). Poe's critical writings, in particular his review of Nathaniel Hawthorne's story collction Twice-Told Tales, also remain noteworthy among scholars. The commentary, first published in April 1842, has played a pivotal role in the field of Hawthorne criticism. In the 1846 essay "The Philosophy of Composition," Poe undertakes an in-depth analysis of his own artistic methods. "The Poetic Principle," first delivered as a lecture in 1848 and later included in the posthumous volume The Literati, offers an invaluable exposition of Poe's aesthetic philosophy, notably the idea that the ultimate aim of art is art itself, independent of social or political contexts. This idea influenced European aesthetic theories of the late nineteenth century and became the foundation of the French symbolist movement.

Baraban examines the reason for Montresor's murder of Fortunato in "The Cask of Amontillado," suggesting that Fortunato "is being punished for his arrogance and for insulting someone who is equal or superior to him."

The Art of Incorporative Exclusion: The Masque of the Red Death

Freedman surveys such themes as narrative self-reflexivity, the primal fear of blood, and the conflict between art and reality in "The Masque of the Red Death."

Poe in Love: Pedophilia, Morbidity, and the Logic of Slavery

House of Mirrors: Edgar Allan Poe's the Fall of the House of Usher

Timmerman describes Poe's attempt to unify Enlightenment thinking with romanticism in "The Fall of the House of Usher," and observes similar concerns with cosmic unity in the prose poem Eureka.

The Function of Terror in the Work of Edgar Allan Poe

Garrison identifies aspects of "artistic integrity" in Poe's body of work. Garrison suggests that Poe's stories employ terror as a "vehicle for the sentiment of Poesy."