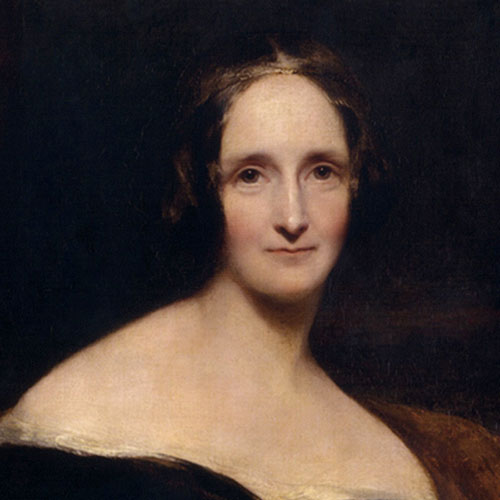 Frankenstein, by English author Mary Shelley, tells the story of a monster created by a scientist and explores themes of life, death, and man versus nature. Read the overview below to gain an understanding of the work and explore the previews of analysis and criticism that invite further interpretation.

Written by Mary Shelley when she was just nineteen years old and published anonymously in 1818, Frankenstein is one of the most recognizable and enduring novels in English literature. The story began as Shelley's contribution to a friendly competition among several of her literary cohorts. While on holiday in Geneva, Switzerland, a period that Shelley later characterized as "a wet, ungenial summer" during which "incessant rain often confined us for days to the house," she and her companions--her husband Percy Bysshe Shelley, Lord George Gordon Byron, and Dr. John Polidori--challenged one another to write a horror story. Her tale of an obsessed scientist who creates and then abandons a human being, thus provoking it to horrible vengeance, has maintained the attention of readers and critics since its publication and has vastly overshadowed Shelley's other works of literature. Initial critical reaction to Frankenstein was often unfavorable, but in the twentieth century critics began to analyze the novel from a variety of new perspectives and to recognize in it many devices and themes which are now presented as evidence that Shelley's self-described "hideous progeny" was ahead of its time.

Frankenstein is structured as a series of framing narratives. The novel opens in the form of four letters from Captain Robert Walton, an explorer on an expedition to the North Pole, to his sister in England. In the last letter, Walton relays that an exhausted man in a dog sledge has strayed toward the ship on an ice floe. Walton and his men convince him to board the ship, and the narrative shifts to the perspective of this man--Dr. Victor Frankenstein--as he recounts his life story to Walton. Frankenstein's childhood, in Geneva, is happy and privileged. Born to a distinguished family, his parents are kind and he enjoys the company of Elizabeth (his cousin in the 1818 edition of Frankenstein, adopted sister in the 1831 edition), and best friend, Henry.

From a young age Frankenstein displays an interest in science. After the untimely death of his mother, he becomes consumed with unraveling the mystery of life. He furthers his scientific knowledge at the University of Ingolstadt, Bavaria, and immerses himself in a secret project: resuscitating the dead. Working obsessively, he brings to life a man stitched together from body parts harvested from corpses. He is horrified with the monstrous result and flees from it, then soon falls ill from shock and overwork, taking several months to recover. More than a year has passed when Frankenstein receives word that his youngest brother, William, has been murdered. Frankenstein departs for Geneva immediately. As he approaches home, he catches a glimpse of his creation in the woods and is convinced that the creature is William's killer, but tells no one. Justine Moritz, the Frankenstein family's maid, has been accused of committing the crime and, based on circumstantial evidence, is convicted and executed. Frankenstein is wracked with guilt knowing that the creature he created caused the deaths of two innocents. Attempting to find peace, he goes to the mountains.

One day, alone on a glacier, Frankenstein is approached by the creature. The story switches to the creature's narrative as he explains to Frankenstein his descent into despair and rage. Rejected by his creator and without guidance, the monster attempts to do good, but is treated harshly by humans he encounters and begins to realize how very shunned and abhorred he is. Enraged, he curses his life, his creator, and mankind. When the creature discovers a boy in the woods, he hopes that the child might be young enough to be unprejudiced toward him, but the child responds to him with shrill screams. Upon realizing that the boy is Frankenstein's brother, the creature grasps his throat, strangling him. As the creature's narrative ends, he demands that Frankenstein make a companion for him, threatening to destroy Frankenstein if he refuses. Frankenstein reluctantly agrees. He departs for England, accompanied by Henry, to learn of any recent scientific developments. Frankenstein tells his father that the purpose of this trip is to see the world before settling down, and that he will marry Elizabeth upon returning to Geneva.

The creature follows Frankenstein to London, and then on to an isolated island in the Orkneys where Frankenstein has set up a workshop, having left Henry behind in Scotland. After half-completing the female creature, Frankenstein destroys her, fearing the consequences of completing her. The creature vows revenge, saying ominously, "I shall be with you on your wedding-night," and departs. Frankenstein disposes of all evidence of the workshop and female creature, and leaves the island. When he reaches land, he is accused of the murder of a man that has washed ashore. The murder victim is Henry--he has been strangled. Frankenstein, raving and feverish, is imprisoned but acquitted of the crime. He returns to Geneva and he and Elizabeth are quickly married. They sail to an inn in Evian and, minding the creature's ominous warning, Frankenstein suggests that Elizabeth retire to their room; meanwhile, he prowls the inn, watching for any sign of the creature. Hearing a scream, Frankenstein rushes to the room and is devastated to find that Elizabeth has been strangled. Frankenstein returns to Geneva, and after his father learns of Elizabeth's murder, he dies of grief. Frankenstein vows to kill the monster he has created. He pursues his progeny to the Arctic Circle, where he encounters Walton. The novel ends with a second set of letters written by Walton. Frankenstein, who had been ill and weakened from cold when found by Walton and his shipmates, deteriorates and dies. Later, Walton finds the creature in the room where Frankenstein lies in state. Walton regards the creature with anger and fear. The creature expresses his suffering, remorse, and self-loathing, and then departs, intending to die.

Upon its publication, Frankenstein garnered commercial success as a Gothic novel, but critically it was for the most part condemned as sensationalist and gruesome. Some reviewers gave halting praise to the anonymous author's powerful imagination and descriptive abilities, while others openly questioned "his" sanity. Frankenstein was viewed as light reading and received scant attention as a serious work of literature until well into the twentieth century. In the mid-twentieth century, critics began to recognize the importance of Frankenstein as a cautionary tale on the dangers of scientific knowledge and now view it as a progenitor of science fiction. Students of both Shelleys find ample discussion fodder in the appearance of the Promethean myth in Percy's Prometheus Unbound and  in Frankenstein.

Interpretations of the novel from biographical, psychological, sociopolitical, philosophical, and feminist perspectives have proliferated in recent years. Sources for and influences on the novel are another area of critical examination and have mentioned such respected works as Johann Wolfgang von Goethe's Faust and Samuel Taylor Coleridge's "Rime of the Ancient Mariner." While the novel has received growing respect, the author's esteem has remained qualified. In a detailed analysis published in 1987, Muriel Spark stated, "The point I wish to establish is, not that Mary Shelley excelled as a prose writer--I believe otherwise--but that where her comparatively utilitarian style is combined with an elaborate theme, her writing is distinctive." Commentators note that it is Frankenstein's ability to support a variety of readings that has inspired continuing critical attention. In a 1988 examination of the novel, Allene Stuart Phy remarked, "There seems no end in sight to the books and essays ... offering 'the true meaning' of Frankenstein" and asserted that Shelley "may well have written the most influential minor novel of all time in any language."

Narcissism As Symptom and Structure: The Case of Mary Shelley's Frankenstein

In the following essay, originally published in 1981, Kestner maintains that Frankenstein "constitutes one of the greatest explorations of pathological narcissism." Kestner finds that Victor Frankenstein epitomizes narcissism, and that this theme is furthered by the novel's frame narrative form resembling a mirror.

The Lessons of Frankenstein: Nature, Nurture, and What Lies Between

Lustig stresses the relevance of Frankenstein to modern issues of biotechnology and religion.

The Scientist As God

Hammond assesses Frankenstein as a commentary on the morality of science and an expression of Shelley's ambivalence about childbirth.

Responsible Creativity and the Modernity of Mary Shelley's Prometheus

Hustis studies Shelley's deconstruction and modernization of the Prometheus myth in Frankenstein, underscoring the function of the novel's 1831 preface.

Zimmerman investigates Victor Frankenstein's childhood experiences in Frankenstein from a psychoanalytical perspective, suggesting that the monster represents the rage and confusion of early trauma.