The changing meanings and usages of terms related to gender and sexuality can be charted in the American Antiquarian Society Collection on Literature, Reports, and True Crime in Crime, Punishment, and Popular Culture, 1790-1920, which features a diverse range of true crime tales, dime store novels, formal state reports, and longer accounts, factual and fictitious. The term “gay” appears in over one thousand monographs over a one-hundred-year period from 1820–1930, peaking in the 1860s with 318 documents describing spirits, songs, companions, groups, conventions, deportment, and art. The term “unsex” appears a scant nine times. One such usage appeared in a trial testimony implicating a woman as an accessory to a crime for which her husband was charged:

But if you dare to raise your arm, to unsex yourself and engage in a conspiracy against the nation’s life and the nation’s honor, to make a widow of one of your own sex, to strike down the father and husband in the presence of his wife and child, I call upon this honest jury of my countrymen to spurn that spirit of mawkish sentimentality.[i]

Scholars of gender and sexuality will welcome the document searches that yield an abundance of results that previously would have required years, even decades of manual research to piece together. Searching the term “queer” in the AAS Collection on Literature, Reports, and True Crime alone returns 742 instances in the monographs. Usage peaked in the 1860s with 283 hits in that decade. By limiting the search for “queer” with the term “dandy” one finds 133 hits for both words spread out rather evenly from 1840–1870. Similarly, by replacing “dandy” with “rake,” 148 hits result. In The Bandit Queen: A Tale of Italy published in 1869, a dandy was described as “a slender, effeminate specimen of humanity, with light, curly hair, blue eyes, and having a very downy mustache on his upper lip, which he was continually trying to twist into sharp points at the corners.”[ii]Such references were also commonly found in the often racy, dramatic, adventure-filled dime novels published by Beadle and Company of New York from 1860 to the early 1900s.[iii]

Historians of sexuality have long traced legal cases pertaining to sodomy for evidence of same-sex intimacy. References to the term “sodom” are also a window in both literal and metaphorical references to the biblical towns of Sodom and Gommorah. A crime narrative about the murder of “Beautiful Maria Bickford” describes the city of New Bedford, MA as “the American Sodom” and home of Bickford’s murder, Albert John Tirrell. “Whoever goeth there may read on every wall: Aristocracy-Murder-Prostitution-Hypocrisy, and Hell,” the account states. The keyword “sodom” also brings up numerous sermons by ministers from the early years of the collection. Students could compare the meaning and context of the term in the two genres of writing with an important overlapping history: crime reporting and religious sermons.[iv]

While dime novels of the time gave a more dramatic read of women and criminality, the T.S. Wood Detective Agency Records, 1865-1945 offer insights into how the growing field of criminology influenced popular views of women’s criminality. In their report on “Women Bandits” the agency summarized the views of Italian criminologist Cesare Lombroso, who claimed that “woman was unsuited for crimes of violence” and especially not disposed to premeditated violence.[v] Most instances of violent behavior by women could be attributed to uncontrollable emotional outbursts. The agency’s report, however, openly disputes Lombroso’s claims based on the experience of tracking women in “the underworld” of the day. The detectives’ observations argue, “Not only are women active partners but in a few cases they seem to be the real leaders, furnishing the cool nerve and managing the details of the hold-ups.” The language used by the detectives to describe these people is as revealing as the incidents themselves. One paragraph describes “lone, feminine wolves” who “prey successfully on taxi drivers.” When Sally Scott of Detroit was caught after a string of robberies, she was taken to police headquarters where it was revealed that she was wearing “a man’s blue shirt” and also had two tattoos on her arm, one of which said “The Godless Girl.” When asked to explain “the sentiments behind these decorations,” she said, among other things, “I really don’t believe in God.” This report closes with an account of an alleged coeducational school for criminals led by a woman, Miss Jackie Bayne. Frustrated by one of the male students, Bayne “told him he would never get anywhere in the crime business,” at which point “she called him a ‘sissie’ and fired him.”

Crimes stemming from gender or sexual transgressions—such as cross-dressing, prostitution, or rape—are well represented. Using the keyword search within each collection, researchers can examine the topic of gender transgressions through accounts of cross-dressing and other subjects. The National Police Gazette on December 6, 1884, featured an image of a forlorn person with delicate hands being stared down by three policemen with bushy facial hair; it was captioned “Discarded Her Petticoats: The Brooklyn Girl Who Wanted to Wear the Breeches.” The story itself was not an unusual one, as nineteenth-century newspapers regularly printed anecdotes of those presumed to be born women who passed themselves off as men for a host of activities including work, travel, adventure, and good times. This story describes a young woman “who has been masquerading in the costume of a dude.”  She was caught pickpocketing and brought to the station, at which point “her sex was discovered,” which created “quite a furor in the courts.”[vi] 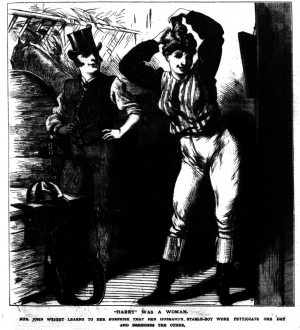 From this image, the keyword “breeches” leads to a story with an image of a person with curvy features and long curly hair; the image is titled “Harry Was a Woman.”[vii]

The “Harry” of the headline was a Harry West who worked as a groomsman for a wealthy man under the supervision of a man named John Wright. Harry was outed as having previously been the wife of a Mr. Donoghue, who tracked down his former wife on a tip that she was involved with Wright. Wright was married with two kids who also lived on the premises, pointing to the conclusion that Wright and West cooked up the scheme together so that West would have a legitimate reason to live in the house, too. These two stories introduce readers to the dynamic, complicated, and exciting accounts of sex, gender, love, and adventure that defy anyone simple characterization or interpretation.

Despite longstanding evidence of women’s crime in prison reports, court transactions, and police blogs, many publications sensationalized representations of female criminality, especially for violent crimes. This trend can be seen in newspaper headlines and popular crime literature. One provocative headline in the National Police Gazette refers to “A Female Jack Shepherd” while featuring a violent, disturbing image of one woman attacking another. 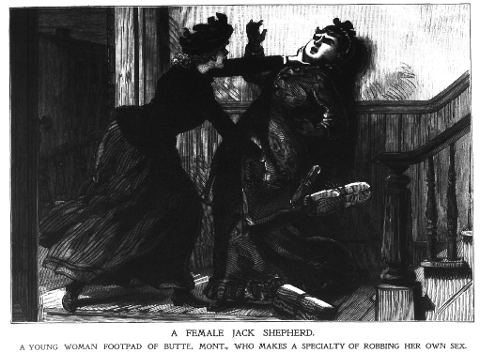 Jack Shepherd was a commonly used moniker for skilled thieves based on the English thief from the 1720s who became famous for breaking out of jail repeatedly. While it doesn’t seem that this young thief came anywhere near the accomplishments or notoriety of a Jack Shepherd, that fact was beside the point. The subtitle clarifies “A young woman footpad of Butte, Mont. who makes a specialty of robbing her own sex.”[i] This piece especially reminded readers of the time that women could be violent thieves, too.

Contrary to the oft-quoted line “Well-behaved women seldom make history,” well-behaved women actually do take up quite a lot of space in history books. Records amassed here in the Crime, Punishment, and Popular Culture, 1790–1920 database, however, offer a way for historians to learn more about women who were true rebels, outlaws, and outcasts. There is scholarly value in examining violations of social norms and laws aimed at defining and containing people, often according to race, class, gender, citizenship, and status as enslaved, indentured, or free.

Jen Manion, Ph.D., is Associate Professor of History and Director of the LGBTQ Resource Center at Connecticut College. Manion is author of Liberty’s Prisoners: Carceral Culture in Early America (University of Pennsylvania Press, 2015) and co-editor of Taking Back the Academy: History of Activism, History as Activism (Routledge, 2004). Jen has also published essays in Signs: Journal of Women in Culture and Society, Journal of the Early Republic, TSQ: Transgender Studies Quarterly, and Radical History Review.

You May Also Enjoy: