Depression is a common mental health disorder characterized by sadness, lethargy, and loss of interest in daily life activities. Read the overview below to gain an understanding of this illness and explore the previews of other articles examining different aspects of depression.

Depression is a mood disorder that causes persistent feelings of sadness, hopelessness, loss of interest, and decreased energy. A diagnosis of major depression means symptoms have been consistent nearly every day for at least two weeks. However, depression is more than just unhappiness. It can be severe enough to interfere with relationships, work, school, and other daily activities. Doctors also refer to this condition as major depressive disorder or clinical depression.

An estimated 1 in 6 people, or nearly 17 percent of Americans, will experience depression at some point in their lifetime, according to the American Psychiatric Association. About 7 percent of Americans have at least one major depressive episode per year. Although the symptoms can start at any age, depression is most likely to begin during a person's teens or 20s.

Depression stems from a combination of biological, environmental, and psychological factors. People with depression often have family members with the condition, which suggests that genetics are involved. If one biological twin has depression, the other twin has a 70 percent chance of also having the condition.

Researchers have discovered differences in the brains of people with depression, as well as in the function of chemical messengers called neurotransmitters. Hormonal changes also can set off depressive symptoms; for example, during a woman's menstrual cycle or after she gives birth.

The following factors increase the risk for depression:

People who have depression will experience some or all of the following symptoms (almost every day for at least two weeks for major depression):

Some people with depression will experience many of these symptoms. Others will have just a few. The severity of depression symptoms can range from mild to severe enough to affect a person's day-to-day life.

Doctors start the diagnostic process with a physical exam and lab work to rule out possible physical causes of depression, such as a thyroid disorder or vitamin deficiency. A psychologist or physician can do a psychological evaluation, asking questions and assessing symptoms according to established criteria for identifying depression and arriving at a diagnosis.

Since chemistry in the brain is linked to depression, a person might take an antidepressant, which can modify the brain's chemistry. Typical treatment includes antidepressants or other medications, psychotherapy (talk therapy), or a combination of the two interventions. Personalizing treatment to the individual can increase the chances that it will be successful.

Antidepressants are a class of drugs used to treat depression. They include the following types:

Sometimes doctors will prescribe another type of medication—such as an anti-anxiety drug, antipsychotic medicine, or stimulant—along with the antidepressant. Antidepressants can take up to four weeks to achieve their full benefits. Other drugs might work specifically for one type of depression. For example, brexanolone became the first therapy approved (in 2019) for treating postpartum depression specifically. It can take a few tries to find the best drug and dosage combination that will relieve your depression.

Talk therapy programs like cognitive-behavioral therapy (CBT) help people with depression identify the negative thoughts and behaviors that result from depression, and replace them with more positive strategies for building coping skills and psychological resilience. Therapy can be done one-on-one with a therapist, as part of a group, or together with a partner or other family members.

If these treatments are not effective, brain stimulation therapies including electroconvulsive therapy (ECT) might be an option. ECT is done while a person is under general anesthesia. Small electrical currents are passed through the brain to induce a seizure. Research finds ECT is often effective in cases where antidepressants and talk therapy fail.

A few alternative remedies and supplements are used to treat depression, including acupuncture, meditation, guided imagery, and tai chi. Evidence that herbal supplements like St. John's wort and SAMe help with depression symptoms is inconclusive, and they are

not FDA-approved treatments. Because these supplements can often cause side effects or interact with other medications you take, alert your doctor first if you would like to try them.

Depression is highly treatable. Up to 90 percent of people will eventually improve with medication, therapy, a combination of the two, or another treatment. However, it can take some trial and error to find the therapy that works best. Help is available for people who are struggling with depression through the U.S. Substance Abuse and Mental Health Services Administration (SAMHSA) helpline at 1-800-662-HELP (4357).

Suicidal thoughts and actions can occur in people who are severely depressed. Anyone who might be considering harming themselves should call a trusted health care provider right away, reach out to supportive friends or family members, or call the National Suicide Prevention Lifeline at 1-800-273-TALK (1-800-273-8255). If a friend or loved one is at immediate risk for self-harm, it is advised to dial 911 or local emergency services.

Clearing the Hurdles: How to Overcome Obstacles in Depression Treatment

"Clearing the Hurdles: How to Overcome Obstacles in Depression Treatment: We sometimes tend to sabotage our efforts to get better. Knowing the warning signs may help you avoid self-inflicted problems." Mind, Mood & Memory, Oct. 2018, p. 4+. Gale Health and Wellness, www.gale.com.

This article discusses the obstacles people face in treating depression, and how to overcome them.

How Exercising More May Help Prevent the Onset of Depression

This article reports the results of study showing that exercise can help prevent depression, even among people genetically predisposed to the condition.

Are Your Medications Affecting Your Mood?

"Are Your Medications Affecting Your Mood? Many people take medications that may cause depression symptoms, a study suggests." Men's Health Advisor, Nov. 2018, p. 6. Gale Health and Wellness, www.gale.com.

This article reports a study showing that many people take medications that are known to have depression as a side effect. People who take these drugs have increased reports of depression, especially if they take more than one of these medications.

New Theory May Explain Cause of Depression and Improve Treatments

This article reports a study that suggests a new explanation for the causes of some cases of depression: dysfunction in mitochondria. This could lead to new approaches to the treatment of depression. 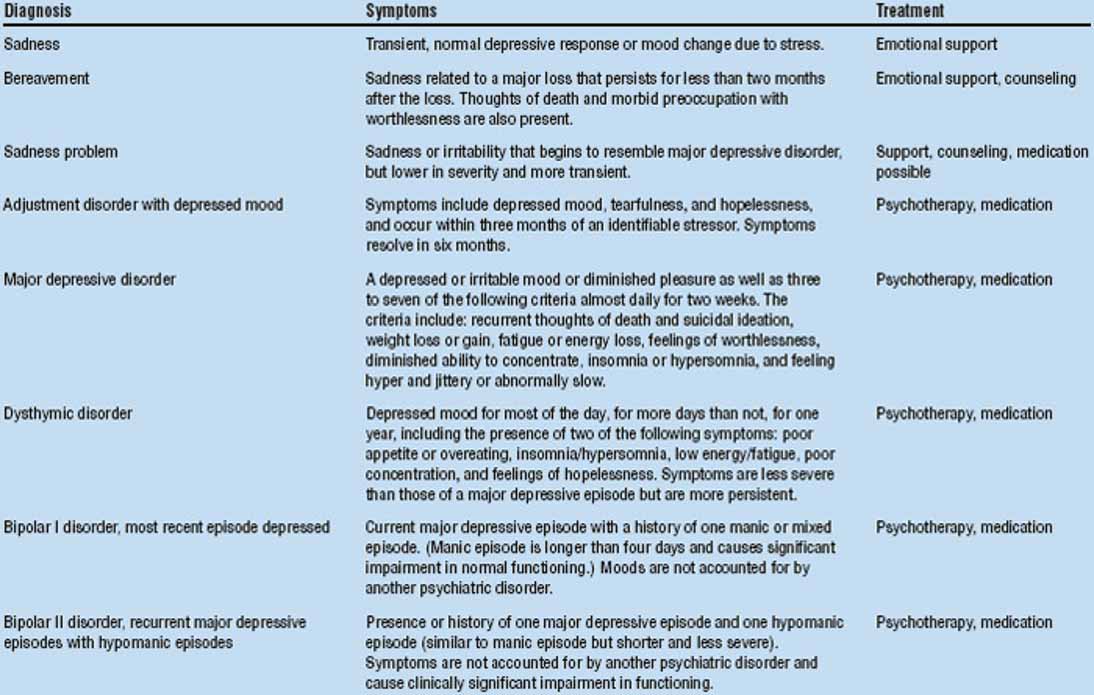 Source: "Academy of American Family Physicians, http://www.aafp.org. Disclaimer: This information is not a tool for self-diagnosis or a substitute for professional care. This image may be used for personal, non-commercial purposes only.